VIDICOM was founded in 1996 and started producing TV reports for 37 Grad (ZDF) and ARD-Exklusiv (WDR, NDR, MDR). Since 2011 VIDICOM has specialized in Aerial – Documentaries for cinema and TV. TV – mini series like “The Alps from above” (10×43 minutes) or “Baltic Coasts” (10×52) have been airing around the world, not only on ARTE and ARD3 but also on HDNET in the USA, the Discovery Channel Europe and Asia, on RAI and ORF.

WDR commissioned VIDICOM with “The Rhine from above” (8×43 min). For NDR we discovered “The Coasts of Germany”. For SWR Television Vidicom created several seasons of the mini-series “Germany’s Southwest from above”.

For the theaters VIDICOM created successful documentaries as well. “The North Sea from above” had 220.000 visitors and became the most successful Arthouse-Film in Germany in 2011.

Numerous films were made in international co-production such as the feature film “Riverbanks” with VERGI in Athens and TAKSIM in Istanbul, the cinematic documentary “Athos” with Langbein und Partner in Vienna as well as the TV – Animatic documentary “Challenging Churchill” with LOYOLA FILMS in Los Angeles.

VIDICOM has been a member of the AG DOK and the European Documentary Network for many years and was a founding member of the documentary section of the German Producers Alliance. 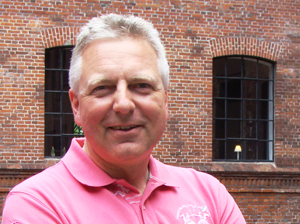 VIDICOM founder Peter Bardehle took his Masters’ degree at Munich University in 1989 and spent one year as a researcher at the United Nations’ headquarters in New York. He earned a doctorate at the University of the German Federal Armed Forces with a dissertation on UN peacekeeping. His first jobs were with newspapers. After graduating from Henri-Nannen-School of Journalism he held assignments as news reporter, editor, and anchorman within the ARD network and ZDF. Prior to founding VIDICOM as an independent production company, he headed SAT.1’s documentary division from 1994 till 1996.

The VIDICOM Logo was developed by the designer Melanie Wepler. She found a photo series of the Scottish inventor Eadweard Muybridge (1830-1904). 2016 the logo was animated and redesinged by Alexander Ochs.

The VIDICOM-Walkcycle is part of “Moving Forward”, a photo series from 1884 by Eadweard Muybridge, who is considered to be the godfather of moving images.